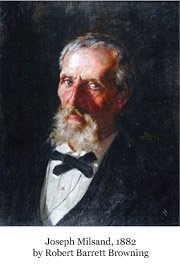 JOSEPH ANTOINE MILSAND (1817–86), French literary critic and author of philosophical and religious writings, was born in Dijon on 23 February 1817, to Jean Joseph Milsand (1775–1833) and his wife Claire Hélène (née Gillotte, 1781–1864). A second child, Charles Philibert (1818–92), was born to the couple the following year. Milsand’s father ran a successful pharmacy from the ground floor of their Dijon residence, first occupied by the family in 1774. The Milsands also held property at Villers-la-Faye, near Beaune, where their vineyards produced highly esteemed Burgundian wines.

Joseph Milsand, though greatly influenced by his Roman Catholic mother, would become a strong advocate for evangelical protestantism. According to a recollection by his son-in-law, Henri Blanc, it was the “contrast between the moral values of his mother and the shortcomings of Catholicism… which led him to find a pure expression of Christian truths. He was inconspicuously drawn to the Protestant church. He invented his own Protestantism.” Milsand’s “own Protestantism” would permeate his writings throughout his life.

His early education was completed in the Lycée de Dijon where he won a prize in painting. He was sent to Italy—Venice, Florence, and Rome—to study art, but a nervous condition affecting his eyesight made it impossible for him to continue his studies. He recounted his Italian travels in Impressions douloureuses d’un Voyage en Italie: la semaine aux accidents, which was published anonymously in 1840.

That same year, Milsand went to Paris to study law, but, as his travel book indicates, his interests and abilities were pointing in other directions. About this time his novelette, La fille du Tavernier, was serialized in La Patrie under the pseudonym Antoine Dilmans, a name he used into the late 1840’s. From January to June 1840, he contributed essays in art criticism to Journal des Artistes. He was also, during this period, developing a thorough knowledge of English literature. Thus attracted to England, in August 1840 he began an extended stay at Haverhill, Essex, as private tutor to a family there. Six months later, however, his repugnance towards the English class system prompted a return to France.

In the August 1851 issue of Revue des Deux Mondes, Milsand continued to focus on English writers with a review of Robert Browning’s Poems (1849) and Christmas Eve and Easter Day (1850). In a letter to her sister Arabella, Elizabeth Barrett Browning wrote of the piece: “It is very ably & conscientiously written, & the most satisfactory review I ever met with on the subject” (31 October–2 November [1851]). She included a passage from Milsand’s article, which translated reads: “I am becoming acquainted with a singular individuality, some would say unhealthy, others will say marvelous, in any case an individuality well fitted to embarrass his judges. To appreciate Mr. Browning, one is forced to prophesy, as if it were a matter of dealing with a new religion. Words fail to give an idea of him. His unique genius is to be able to do what Mr. Tennyson cannot; it is to see again in each act a summary of all creation.”

A few months later, Milsand reviewed Elizabeth Barrett Browning’s Poems (1850) and Casa Guidi Windows (1851) in the January 1852 issue of Revue des Deux Mondes. Although “pleased” with the notice, the poetess was more impressed with the writer himself who, prior to submitting the review for publication, had asked Browning about including biographical details of her life from Mary Russell Mitford’s Recollections of a Literary Life (1852), in particular, details concerning the death of her favorite brother, Edward. Browning advised Milsand not to include them, and they were left out. Subsequently, Mrs. Browning remarked to Julia Martin: “Observe the delicacy & sensibility of this man… I shall be grateful to him as long as I live” (letter dated 17 January [1852]).

In Paris, in October 1851, the poets and Milsand were introduced by mutual friends, John Frazer Corkran and his wife Louisa. In a letter to John Kenyon written in January 1852, Browning described his new acquaintance as “one of the finest, gentlest, and trust-worthiest of men.” The poets were immediately drawn to Milsand’s warm endearing character and impressed by his critical insight.

It was partly through Milsand’s connections in Paris that the Brownings met a number of important thinkers and writers, including François Buloz, the editor of Revue des Deux Mondes; Paul de Musset, brother of the French poet; and the English artist and critic William H. Darley. It was in a letter to Darley, dated 23 September 1855, that Milsand, having read an advance proof of Browning’s Men and Women, remarked: “Les morceaux sont des espèces de monologues dramatique.” This is the first recorded instance of Browning’s poems being referred to as dramatic monologues. In 1863 Browning dedicated a revised edition of Sordello to Milsand.

Milsand’s interest in art and literature led him to the study of aesthetics, philosophy, and theology. He wrote prolifically on these subjects for the Revue des Deux Mondes and, later, for journals such as La Critique Philosophique and La Critique Religieuse (both edited by French philosopher Charles Renouvier), as well as Le Signal and Le Témoignage. He also produced book-length studies: L’esthétique anglaise, étude sur M. John Ruskin (1864); Les études classiques et l’enseignement public (1872); and Luther et le serf-arbitre (1884). In assessing Milsand as a philosopher, William James told François Pillon in 1884: “I read only one part of M Milsand, and want to read the whole of it. He is undoubtedly a man of genius with an insight into the deepest relations of things.”

In 1852 Milsand formed a union with Laure Thérèse Henry (1826–96), whom he had met in Paris. Their marriage, delayed because his mother refused her consent, took place in 1865, a year after her death. The couple settled in Paris where they had one child, Claire Thérèse Milsand (1852–1934), who was educated to the uncompromising standards of her father. She was taught English, as well as Latin, and even on her wedding day was obliged to do her compulsory Latin translation. In 1876 she married Henri Blanc (1830–87), a theologian. Their six children were much indulged by their grandparents and the Brownings. The correspondence between father and daughter contain many illuminating details about the life of the two families, as well as the circles in which both the poet and Milsand moved.

It was also in 1852 that the poet’s father and sister, Robert Browning, Sr. and Sarianna Browning, moved from London to Paris. Milsand soon entered into warm relations with them as well. The many letters between Sarianna and Milsand chronicle their friendship and provide valuable insights into the life and works of both Robert and Elizabeth Barrett Browning. A number of English newspapers, addressed from Browning or Sarianna to Milsand or his daughter, give evidence that the two families were closely connected on various levels of day-to-day life.

From the mid-1860’s until Milsand’s death, he and Browning met frequently both in France and in England. Between 1866 and 1885 Milsand made no less than eighteen visits to 19 Warwick Crescent, Browning’s London home, each of a duration between three and six weeks. Their meetings in France included three joint holidays on the Normandy coast.

Over the years, Milsand became a surrogate uncle to the young Pen Browning. The poet in turn stood as godfather to Milsand’s grandson, Robert Blanc. This extraordinary friendship ended only when Milsand preceded his friend in death on 4 September 1886 at his family estate in Villers-la-Faye. He was buried there on 6 September.

On 10 September 1886, Browning wrote to Milsand’s widow: “Accept, dear Madame, my assurance that I will always associate you with the memory of the friend whom, in all my life, I most loved.”

The Joseph Milsand Archive remained in the possession of the family until 1998. It was acquired by the Armstrong Browning Library of Baylor University in 2004. The acquisition was made possible by a generous donation from the Bob and Anna Wright Family Foundation of Vernon, Texas.